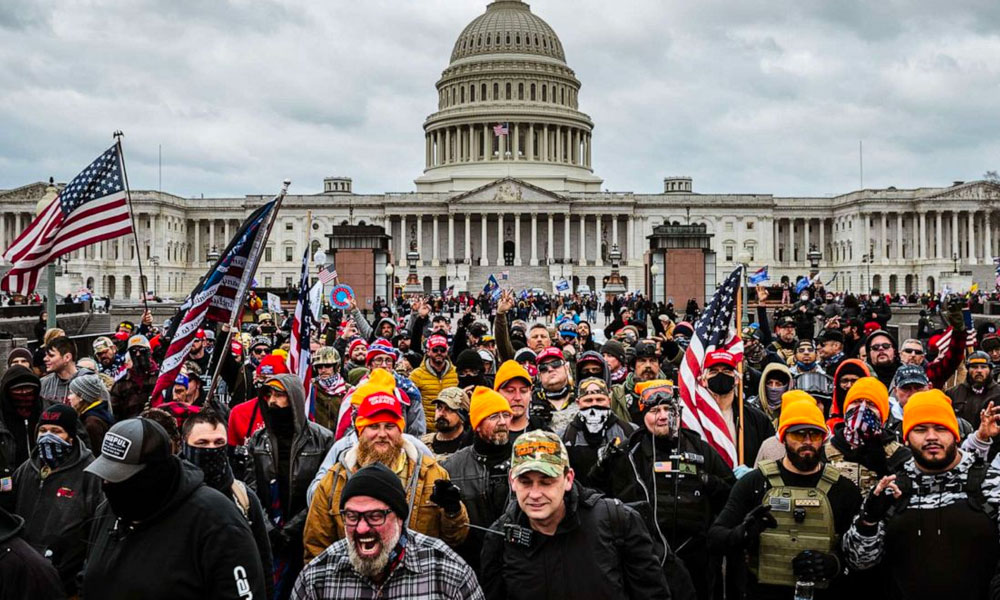 A new investigative report published Friday by The Huffington Post revealed that “at least 21 state and local Republican officials attended the Jan. 6 rally in Washington, D.C., that turned into a violent riot.”

The officials, many of whom are now under pressure to resign, “traveled from 16 different states, arriving for the ‘Stop the Steal’ demonstration on the White House Ellipse, where they watched President Donald Trump tell incendiary lies” about the election being stolen.

According got the report, “13 members of state Houses or Assemblies; three state senators; a county commissioner; a city council member; a GOP congressional district chair; a district director; and a co-chair of the Michigan Republican Party were in the crowd. The group also includes a QAnon conspiracy theorist; a self-described member of a fascist militia; and a man who once declared that “the only good Democrat is a dead Democrat.”

As noted by HuffPost, “these GOP officials “were eager participants in a nakedly anti-democratic ploy to keep their preferred president in power, and helped whip a fascist mob into a frenzy,” noting that their participation underscores the Republican party’s rank “complicity in fomenting a historic insurrection.”

Here are the names of the state and local GOP officials that were part of that mob per the report (This list does not include the federal lawmakers in attendance.):

Derrick Evans, 35, a newly elected Republican member of the West Virginia House of Delegates, livestreamed himself breaking into the Capitol, leading the charging crowd in a chant of “Trump!”

Couy Griffin —  Republican county commissioner in Otero County, New Mexico, who founded a group called Cowboys for Trump — filmed himself on the steps of the Capitol building during the insurrection.

Griffin, who previously made headlines for stating that “the only good Democrat is a dead Democrat,” was arrested this past weekend as he returned to Washington, D.C., to protest the inauguration.

Doug Mastriano —  Pennsylvania Republican state senator and Trump fanatic, spent thousands of dollars to charter buses for people to travel to D.C. for the Capitol rally, according to the report.

Mike Azinger —West Virginia Republican state senator who told a talk radio show that he attended the Capitol rally but did not breach the building. He also pushed the false claim that “antifa” was responsible for the violence there.

Dave LaRock — Republican Virginia Del. Dave LaRock who attended the rally and falsely claimed that it was “highly likely” that those who forcefully entered the building were “paid provocateurs sent in to taint the protest. LaRock has led the GOP charge in Virginia to discredit the results of the 2020 election, resulting in recent calls for his resignation.

Ron Hanks — Incoming Colorado state Rep. Ron Hanks said he marched to the Capitol after watching Trump speak near the White House on Jan. 6, but did not enter the building.

Amanda Chase — Virginia state GOP Senator and a “self-christened Trump in heels.”  The Virginia state Senate voted 37 to 1 on Tuesday to strip Chase of her only committee assignment as punishment for her participation in the Jan. 6 rally.

Mark Finchem — Republican Arizona state Rep. who “actively encouraged the mob, both before and during the attack on the Capitol.” Over 40 Democratic Arizona state senators and representatives sent a letter to the FBI and the Dept. of Justice last week calling on the two agencies to investigate him for his role in the Capitol riots.

Terri Lynn Weaver — Republican Tennessee state Rep. who attended the Jan. 6 rally.  When the horror of the attack on the Capitol had been well-documented he tweeted that it had been an “epic and historic day” in D.C.

Justin Hill — Missouri state Rep. Justin Hill skipped his own swearing-in ceremony to attend the “Stop the Steal” rally in Washington on Jan. 6, but claims to have never entered the Capitol building.

Matt and Meshawn Maddock —Republican Michigan state Rep. Matt Maddock and his wife. Democratic state lawmakers in Michigan have called for the censure, investigation and ultimate expulsion of Maddock for his “continued attempts at undermining democracy by fomenting election conspiracy theories and assisting with the heinous attack on the U.S. Capitol.”

Annie Black — Newly elected Nevada Assemblywoman Annie Black, a vocal Trump supporter, said she did not storm the Capitol building in D.C. on Jan. 6, but observed the chaos from a distance. In an email to her supporters after the day’s events, she suggested “antifa” infiltrators may have incited the violence, citing anonymously sourced reports in the New York Post and Fox News.

Dan Cox — “Pence is a traitor,” tweeted Maryland Del. Daniel L. Cox as Trump’s supporters stormed the Capitol. The assemblyman last made headlines in October after tweeting hashtags supportive of the QAnon, the pro-Trump conspiracy movement.

Vernon Jones — Outgoing Georgia state Rep. Vernon Jones, a rare Trump-supporting Democrat, was a featured speaker at the Jan. 6 rally, warming up the crowd before Trump took the stage. “I’m officially joining the Republican party!” he shouted as the MAGA crowd cheered.

Chris Miller — Illinois state Rep. Chris Miller posted a video of himself to social media showing himself near the Capitol shortly before the riot, warning his supporters that “we’re in a great cultural war” with “dangerous Democrat terrorists.” Miller is the husband of Rep. Mary Miller, a newly elected U.S. congresswoman facing a torrent of calls to resign after she cited Adolf Hitler in a speech she gave at the Capitol rally.

David Eastman — Alaska state Rep. David Eastman flew all the Washington, D.C., for the rally but claims not to have participated in the storming of the Capitol.

Justin Price — Rhode Island state Rep. Justin Price admitted on Twitter that he “marched to the Capitol” with “peaceful patriots” but never entered the building. He blamed “antifa” for instigating the violence in another tweet, arguing that the anti-fascist activists had “infiltrated” the rally. Price is facing calls from his fellow Rhode Island lawmakers to resign.