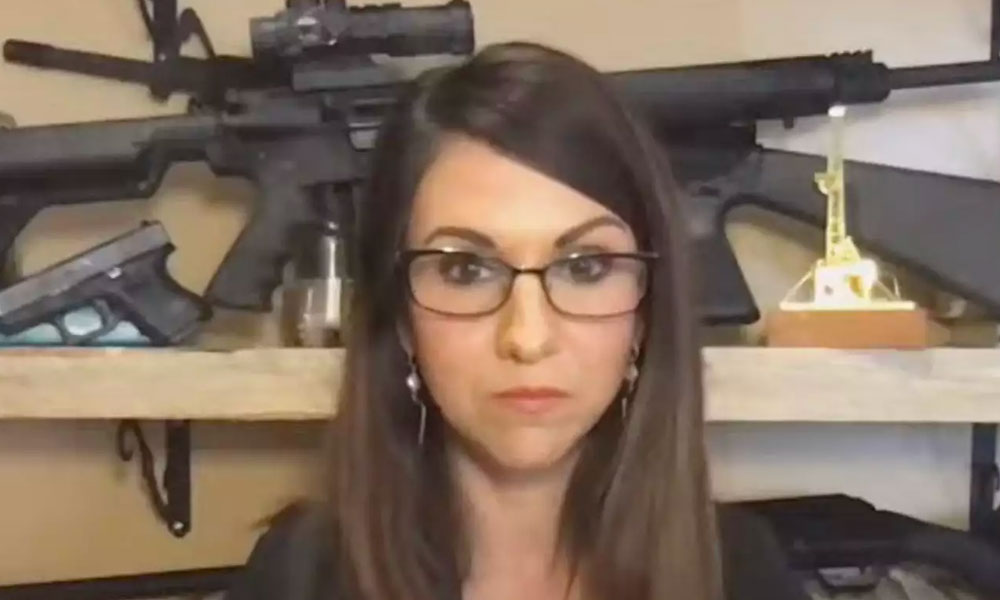 Rep. Lauren Boebert (R-CO) is being ridiculed on social media after users noticed a drastic change in her decor on Tuesday night after she posted an interview she did with Newsmax on the mass shooting in her state on Monday.

Weeks ago, Boebert faced harsh criticism for appearing on a Zoom session with a full display of her personal “assault weapon shrine” stacked on the bookshelves behind her. During her interview with Newsmax, however, those same guns were replaced with books.

The not-so-subtle change did not go unnoticed as you can see in the reactions below.

There are no gun laws that would’ve stopped Ahmad Al-Issa from killing ten Americans in cold blood.

Big government gun grabs are not the answer to the issue of violence in our nation. pic.twitter.com/bgw7dOUiD5

You moved your slaughter weapon decorations. Also, you’re wrong. A law prohibiting him from buying an AR-15 would have stopped him from obtaining one last week. Love that you use his name, though, you didn’t use Atlanta shooter’s name. Wonder why?

So where'd all your guns go..this is the same background as in the video pic.twitter.com/aGdTZ1U3Vf

Not easily buying an AR may have kept him from killing 10. Handguns are for close range, or require lots of training. Other rifle platforms don't get follow up shots or acquire multiple targets so easily. High volume killing is what the AR platform was invented for, and it shows.

What happened to the assault weapon shrine, Shooty McCriminal?

Thoughts and prayers to the poor assistant had to run out and buy a bunch of random books for your shelf. pic.twitter.com/19IxwYUjQi

Absolutely false Osama Bin Boebert. We had an assault weapons ban passed in the nineties, that reduced the number of mass shootings, that Bush let expire in 2004. In states with stricter gun measures the incidence of these mass shootings is lower. https://t.co/aeZ16N1IYN

Bullshit! We banned guns in Australia and guess what no mass murders.

If he had no gun, it would have never happened.

With KIDS in the house! Irresponsible gun owner! @RepBoebert

What is the stance of Colorado child protective services on guns within easy reach of children? I mean since they all but lead the nation in school shootings and all.

Why did you change your background? pic.twitter.com/UHAcWae58x

Still not being booked for Fox? One can’t help but note, through all of your defense of everything gun related, what is missing from your bookshelves (hint: it was never books). pic.twitter.com/e1GmTXeJ3X

Wow…no other country seems to have this chronic affliction with killing its neighbours. #karma

lauren would hate for her mugshot to be the top response to this tweet… pic.twitter.com/Z8yd2ffuvf