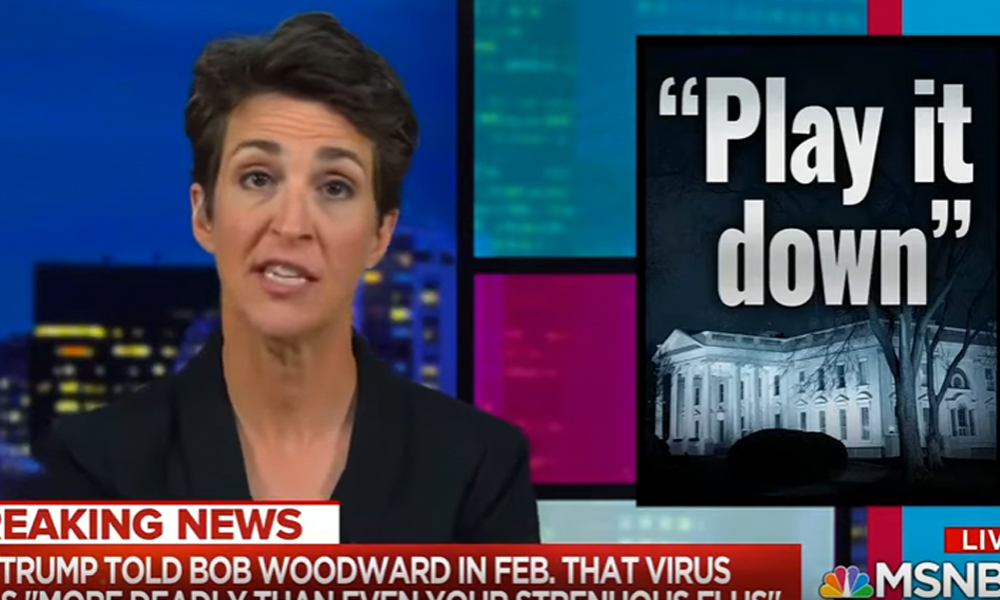 MSNBC’s Rachel Maddow began the night on Wednesday by talking about the scathing revelations in Bob Woodward’s new book, “Rage.”

“I don’t mean to make light of this and downgrade the gravity because of what’s going on in the news right now… this is heavy stuff for our country. I kept on thinking over and over again as each unbelievable news story broke in the past 24 hours. If this were a TV series of what’s going on in American politics right now, tonight would be the episode of the TV series where the president of the United States resigns,” Rachel Maddow began.

Maddow then played the recording of Trump confessing that he chose to “play down” the dangers of COVID-19, despite knowing the virus was deadly.

“I wanted to always play it down. I still like to play it down because I don’t want to cause a panic …It is also more deadly than your strenuous flu,” President Trump said.

“That’s what he knew,” Maddow continued. “The president admits he likes to ‘play it down,’ even though he knew just how bad it is, that it is… ‘deadly stuff’ and ‘young people are not immune’ and this is not like the friggin’ flu.”

“He’s mocking people wearing masks and talking about this is like it’s no big deal and it is going to go away on its own ..In the well-written drama we all wish it was, this is the episode where the president resigns. But, instead we just keep going on…”

Take a look at her monologue below: