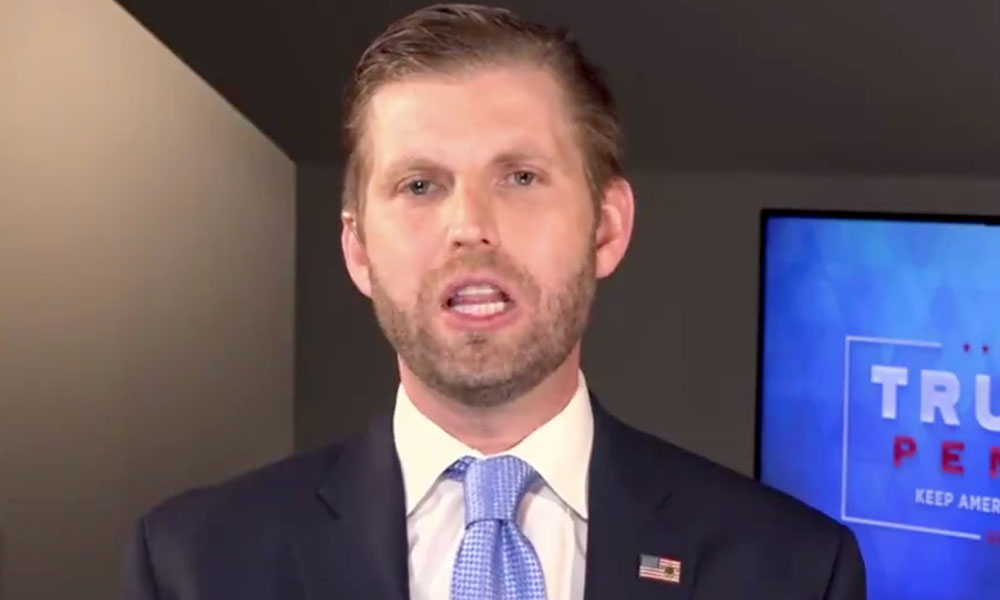 Appearing on ABC News on Sunday, Eric Trump defended his father’s murky business dealings in response a New York Times’ article that revealed the president used his political position to create new, more lucrative forms of income through his hotels and golf courses.

According to the report, Trump reaped millions in exchange for favors toward hundreds of companies, lobbying groups and foreign leaders who stayed at Trump’s commercial properties.

However, Eric Trump came to the president’s defense claiming that his father “wakes up every morning to fight for you and fight the media.” He also claimed that his father “lost a fortune.”

Karl quickly interjected, asking for a response that directly addressed the claims made by the Times. Eric Trump instead called into question Joe Biden’s finances.

“Go Google Biden’s house right now and tell me if you think that a person who’s been in government for 47 years can afford that mansion, on the water in Wilmington, Delaware,” Trump said. Both Biden and Harris released their tax returns right before the first presidential debate.

When Karl again asked Trump to address the Times article, the president’s son said, “We’re a hospitality company. We’ve got tens of millions of people staying at our properties every single year. The New York Times is absolute fake news. All they want to do is take down my father.”

Trump then went on to claim that the media in the U.S. has become an “activist arm for the Democratic Party.”

Watch the video below and some of the reactions below:

NEW: “My father has lost a fortune,” Eric Trump tells @jonkarl when pressed on a NYT report that Pres. Trump turned “his own hotels and resorts into the Beltway’s new back rooms, where public and private business mix and special interests reign.” https://t.co/fsCP2um0H5 pic.twitter.com/MtZLiszs2K

We know. Trump “loses” a fortune every year. And then he writes it all off, on your backs. Meanwhile, he’s launderering criminals’ drug, arms, and human trafficking money through his properties. It’s all a sham. This house of cards is falling down. pic.twitter.com/iUbkc1tjfI

Trumps are never capable of speaking, just screeching about crazy theories. They never answer a question. It’s why interviewing them goes nowhere.

The ticking time bomb is in his TAX RECORDS because why would he defend them so vigorously if there were nothing to find out? He's literally spent millions trying to keep them sealed.

Ok I watched this nonsense and all it did was give me a headache. Stop giving a platform to these fools and liars. They have nothing useful to say. From now on if anyone from the DJT organization is booked to be on the show, I’m out. 🙄

I just can't believe those Trump fools are being booked for the Sunday shows. They should be gone after the Elections. Eric Trump got nothing to construct his response from the new New York Times article on the Trump taxes late last week.

I believe Eric—trump has lost a fortune so he made the Presidency into a fund raiser. So Eric, since trump doesn’t need the job, we’ll help him out and not re-elect him. How about that?

Truth hurts Trump because he has built his empire upon a foundation of lies, greed and stiffing those who worked for him. How did Eric's deposition go? Why can he not address the facts of the article? I am over the Family of Woe Is Me. Real, hardworking Americans are struggling.

When the Trumps leave the White House there will be nothing to protect then from the rule of Law. They will be prosecuted for all their crimes.

Sure he has, but not while he has been president. He is a failure in many ventures, owes millions of dollars, & is essentially a leveraged brand running a con while sponging off the American people & siphoning money to his grifting children and billionaire enablers.

Eric is desperate, unable to answer the question. They gave out contracts and got NOTHING in return. They can’t even grift right. They expected to get away with it, but they’re going down so hard after this. Even McConnell has to disavow this level of incompetence & stupidity.